BRIEF HISTORY OF BUDDHISM IN THE KINGDOM OF CAMBODIA

In the year of 238 B.C (before Christ), Emperor Asoka King sent two learned Bhikkhu monks named Sona Thera and Utara Thera to propagate Buddhism in Suwanaphumi or Southeast Asia of present time. From that time Buddhism has flourished through out the land of Suwanaphumi or golden land. We are able to trace back through various ancient kingdoms such as Funan Kingdom (first state of present Cambodia) had been claimed about the advantage of Buddhism in this capital city. Among the kings of Funan dynasty, Kaundinya Jayavarman (478-514 AD) sent a missionary to China under the leadership of a Buddhist monk named Nagasena from India. During the reign of the same Chinese emperor, two learned Khmer monks named Sanghapala Thera and Mantra Thera of Funan went to China. At this early years of the sixth century AD, the two learned Cambodian Bhikkhu monks taught Buddhism and meditation to the emperor of China. Bhikkhu Sanghapala had translated an important Buddhist scripture Vimutti Magga(the Way of Freedom) which it is believed older than Visutthi Magga (the Way of Purity) written by Buddhagosacara. Now this Chinese manuscript has been translated into different language by many Buddhist countries.

King Rudravarman (514-539 AD) is said to have claimed that in his country there was a long Hair Relic of Lord Buddha for his people to worship. The Tharavada with Sanskrit language flourished in Funan in the fifth and earlier part of the sixth centuries AD. Around seventh century AD, the popular usage of Pali language in southern region manifested the strong appearance of Theravada Buddhism in Cambodia.
The great emperor, Yasovarman (889-900 AD) established a Saugatasrama and elaborated regulations for the guidance of this asrama or hermitage, at the time, Buddhism, Brahmanism (both Visnuism and Vaisnavism) flourished in Cambodia. During the reign of Jayavarman V (968-1001 AD), the successor of Rajendravarman II, Mahayana Buddhism importantly advanced. The king supported Buddhist practices and invoked the three forms of existence of the Buddha. In this way, up to the tenth century AD, Mahayana Buddhism became substantially prominent.

Pramakramabahu I, the king of Sri Lanka, is said to have sent a princess as a bride probably for Jayavarman VII, son of Dharnindravarman II (1150-1160

AD), who was the crown prince. King Jayavarman VII (1181-1220 AD) was a devout Buddhist and received posthumous title of Mahaparamasaugata. The king patronized Mahayana Buddhism, his records expressed beautifully the typical Buddhist view of life, particularly the conduct of charity and compassion towards the whole universe. Taprohm Inscription of his reign informed that there were 798 temples and 102 hospitals in the whole kingdom, and all of them were patronized by the king. One of the monks who returned to Burma with Capata Bhikkhu was Tamalinda Mahathera, who is believed the son of the Cambodian Emperor Jayavarman VII. Under the influx of Sihala School Buddhism; his administrative prestige retreated, his temporal power crumbled away, and the god-king cult was weakened. Theravada Buddhism had become the predominant school of the people of Angkor at the end of Jayavarman VII ‘s reign.

END_OF_DOCUMENT_TOKEN_TO_BE_REPLACED

The Life of the Buddha

The essay written By Radhika Abeysekera

This book is for free distribution only.

This book is dedicated to my mother and father, Mrs. S. Seneviratna and the late Mr. D. A. Seneviratna.

They made this book a possibility by giving me a Buddhist upbringing. May they attain Nibbaana.

2. The right continent – All Buddhas are born in India (known as Jumbudipa at the time of the Buddha). This is because the people of India are spiritually more advanced than people in other countries, and so are more ready for a Buddha.

3. The right area – The city of Kapilavatthu was chosen as the city of the future Buddha, as there was a just and good king and many righteous people living there.

4. The right caste – A Buddha is always born in a high caste – Either a royal caste or a priestly caste. This is necessary, as often persons born in a low caste are not accepted by society.

5. The right mother – The mother of a Buddha has to be very pure. She is a person who has resolved to be a mother of a Buddha and observed the five precepts for many countless past lives. The chosen mother was Queen Mahaa Maayaa, wife of King Suddhodana of Kapilavatthu.

(1). Bodhisatta – One on his way to perfection. This is the name given to a person who is trying to be a Buddha. 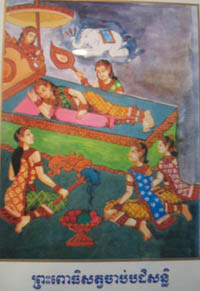 [02]. Queen Mahaa Maayaa’s dream
One night Queen Mahaa Maayaa had a dream. She dreamt that the Devas from the four directions of the earth took her to Lake Anotatta on top of the Himalayan mountain. She was bathed in the lake and dressed in heavenly clothes and ornaments. A white baby elephant carrying a white lotus flower in its trunk trumpeted, and after circling around her three times, entered her body.

The next morning she told King Suddhodana of her dream. He consulted some wise men who, on hearing the dream said, “The Queen will have a wise and noble baby boy.” The king and queen were very happy for they had no children and were longing for a child. 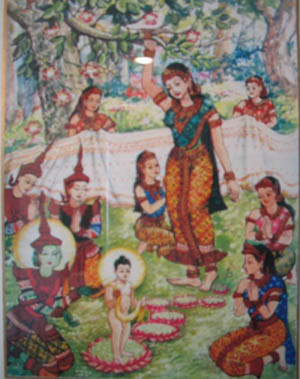 [03]. The birth of a Prince
According to the custom of that time, Queen Mahaa Maayaa decided to visit her mother so that she could be with her at the time of the birth of her baby.On the way she stopped at the Lumbini Pleasure Garden to rest. Under a sweet-scented Sal tree, on a full moon day in the month of May, in the year 623 B.C., the Prince was born. The baby Prince took seven steps, and a lotus flower burst through the ground to receive His feet. He made the following announcement:

It is said in the Anagata Vamsa that the next Buddha, Maithreya, will make a similar announcement at His birth.

The ministers took the Queen and the baby back to Kapilavatthu and King Suddhodana. Many wise men came to see the baby. They said that one day the Prince would either be a King of the world or a Supreme Buddha. The baby Prince was named Siddhaartha Gotama. Siddhaartha means “wish fulfilled” and Gotama was His family name. Seven days after the birth of the Prince, Queen Mahaa Maayaa died. She was born as a Deva by the name of Matu-deva putta in the Tusita Heaven. Her sister, Mahaa Prajaapathi Gotami, took care of the Prince.